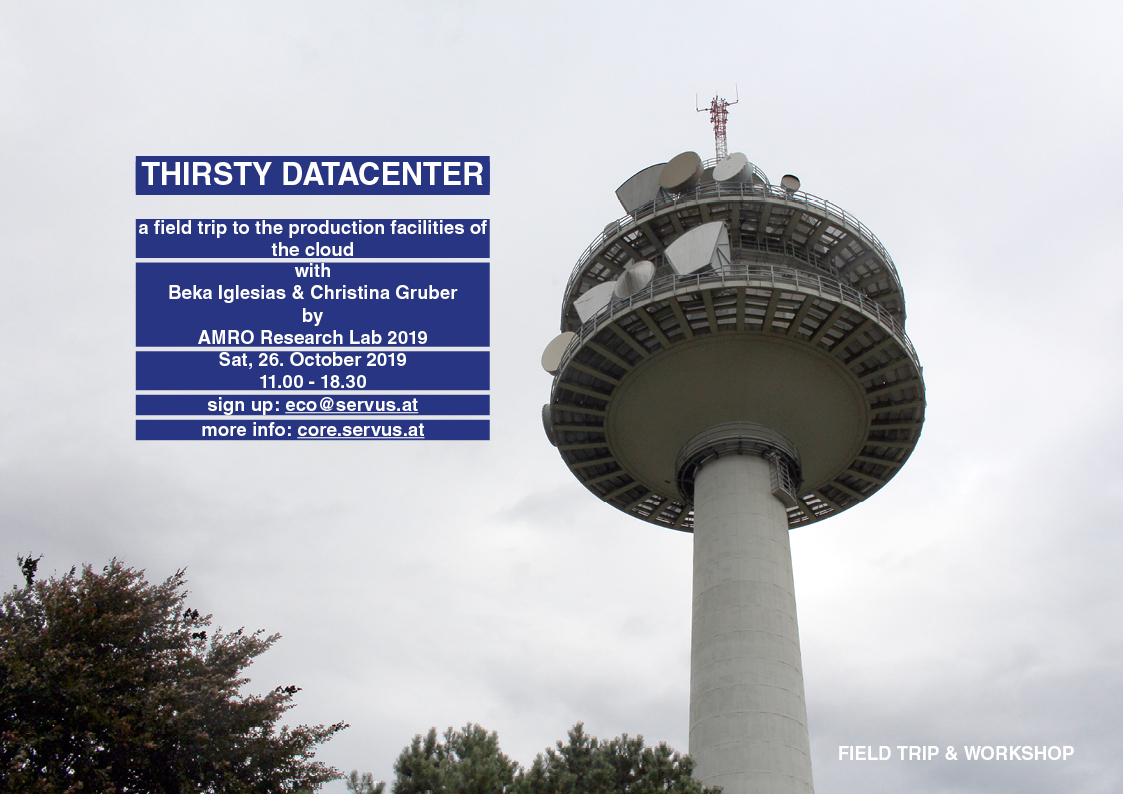 A field trip to the production sites of the Cloud

The field trip takes place on the Austrian National Day and will take us to different production stages of the cloud, a global network of servers. Water plays an essential role in the formation of meteorological clouds and “data clouds”. We will approach clouds in their different stages – before, after and in the middle of their formation. Therefore, we visit locations in the area around Linz. For the observation of these clouds, the software engineer interaction designer and gender/biohacker Beka Iglesias will present different DIY sampling methods usually applied to test pollution levels in rivers.

We started the field trip at our headquarters in the servus Clubraum in Linz. Christina Gruber gave an introduction to the project of collecting analog particles and especially water in relation to the Cloud and its production sites. Throughout the research, the surroundings of Linz revealed many of these grounds. To assess the places with different methods we invited Beka Iglesias, software engineer and interaction designer, who developed and applied a set of DIY water testing kits. Important notions for the field trip were the closely interwoven networks of technology with topography, inter-species relations and questions of ownership. Water as one of the universal commons, one would think, gains more and more importance in this process.

Clouds are not real objects constantly changing their composition and minute particles, therefore we visited three different stages of the Cloud. Stage one is a cloud in operation.  Situated in Linz at the Danube shore is a datacenter using excessive groundwater from the Danube to cool its servers. The cool water guarantees cheap and sustainable maintenance of the datacenter. Afterward, the water is released into the Danube. The vapor cools server racks, creates clouds above the water and might change micro-ecosystems underwater.

The second stage is a Cloud in the making. Kronstorf, Upper Austria.

The third stage is the alternative Cloud, the radio relay tower in Ansfelden.

The guided tour is organized by servus.at and is part of this year’s AMRO Research Lab, in which Christina Gruber, Antonio Zingaro, and Davide Bevilacqua deal with the physical interweaving of internet infrastructure and natural environments. We are working on “greenwashed” environmental-friendly propaganda used by corporations to augment profits and on the ways one could re-think the balance between energy production (from natural sources) and landscape exploitation of the digital infrastructure.

In preparation for the event, we visited several infrastructure nodes for the production of the Cloud, like the LINZ AG Datacenter and the Ennskraft HYDROPOWER PLANT Staning.

About Calafou and the Rienda Anoia Project

Calafou, as it is today, is the result of ideas, passions, experiences and visions developed over a long time. An artifact that brings the future, a machine that generates paths and collective identities. A complex organism and hybrid made of multiples subjectivities that cooperate to build a reality of life-based on the codes we chose, that belong to us and that we share. At last, a set of infrastructures that aims to remediate the lack of technological sovereignty we endure and which aims to make us dependent on the financial-industrial-cognitive empire. That is why we are strongly motivated to share the primary basis of our activities: the creation of collective knowledge. At the same time, it is necessary to understand that it is a very young project (from 2011), and as they say, there is a lot more to do.
Riendo Anoia is a project that tries to know, respect and contribute to regenerate our Anoia river and our whole ecosystem. We use a combination of techniques and methodologies for it: systematic observation, DIY tools, subjective and poetic observation, specific analyses in specialized laboratories and ethical algorithms to process and divulge the data.
calafou.org
wiki.calafou.org

Software engineer and interaction designer. Gender/Bio hacker. I love daily life hacking as way to generate social transformation. I am an explorer of live synesthesia through body and technology in a real-time posthuman environment. A lover of free and autonomous technologies and DIY/DIT methodologies. Someone who thinks myself like a node in a cyborg mesh, involved in multiple synergies and symbiosis in the interstices between art, technology, science and nature/society.