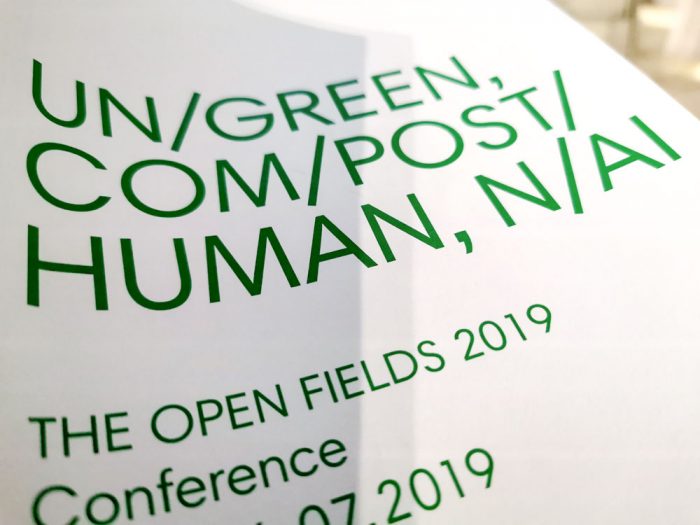 The first research phase took place within the framework of the conference “un/green: naturally artificial intelligences“, which was the fourth Open Fields conference on art research and the “un/green exhibition” part of the RIXC Festival in Riga.

AMRO Research Lab was invited to present the current state of research at the conference in the form of a conference presentation entitled “Unpacking Digital Greenwashing – Is an organic internet possible?”

Abstract of our presentation:

Aiming at discussing the ecological trend on the Internet, this presentation was based on an attempt to define how Digital Greenwashing can be understood as a practice in which Internet corporations combine the use of green computing with ecological-friendly marketing strategies.

In the Internet, “greenness” is not only a label to apply to fields like food, mobility, clothing or architecture but to the Internet as well. The large corporations of the Internet industry begun as well presenting a growing interest for zero emissions and sustainable computing, interest which nevertheless relies also on rhetorical practices belonging to the gray areas of marketing and self-representation. Currently, companies like Amazon, Facebook, Apple and Google began promoting their investments in 100% green data-centers as further reasons to trust in their business and sustain their activities. By claiming their support to the environmental motives, these companies are not only arguably performing „classic“ Greenwashing practices based on the attempts at polishing their image in order to enlarge profits.
Through their very specific rhetoric, they even push towards a re-centralization of the Internet, in which environmental activism is a synonym for „optimization“ of the infrastructure. Furthermore, many of these proclamations aim at ultimately triggering a deeper interaction with users, interaction that is presented as the solution of an induced sense of guilt. These practices are designed to conceil that much of the responsibility should be on the corporation itself, due to their chosen business model and an exaggerated carelessness over the past decades. Instead, the data companies offer their consumers an opportunity to make peace with themselves with a mere click of the mouse.
Referring to a framework of digitally renewed Greenwashing practices, our presentation tried to “unpack”the various intertwined components of the recent „environmentalist turn“ of digital capitalism.

During the conference, which was also accompained by an art exhibition at the Latvian National Museum of Art, we had the chance to get in touch with the research of many artists working in the field of environmental activism and critical practices. The show featured works, among the others, of Eva-Maria Lopez, Marloes de Valk (with a work produced in the collective Iodine Dynamics), Joana Moll, Quimera Rosa and Rihards Vītols.

Eva-Maria Lopez‘s I Never Promised You a Green Garden consists of a series of mandala-like graphic works that include logos of several companies selling polluting chemical products for agricultures. Iodine Dynamics‘ What Remains is an 8-bit interactive fiction and adventure video game about environmental issues, the manipulation of public opinion, and whistleblowing, that the audience could play in the exhibition. Joana Moll‘s projects CO2GLE and DEFOOOOOOOOOOOOREST are two browser-based installation that deal with the energy consumprion and the related CO2 emission of internet browsing activities – which we also included in our presentation as example of possible future implementable tools. The very ironical work of Rihards Vītols Anniu deals with the melting of the artic pole and proposes the adoption of ice-cubes producing ships to compensate for the loss of frozen surface. And lastly, Robert Hengeveld‘s Kentucky Perfect nicely visualizes human doggedness of controlling nature with a kinetic work in which a lawn is constantly irrigated, illuminated and mowed by a mechanical arm.

Throughout the conferences we fond conversation also with the spanish artist and architecture collective Taller de Casqueria working about mapping an the mismatch between physical and digital landscapes with a focus on water. Paul Granjon, a media artist which recently begun collaborating with the recently-emerged activist group Extintion Rebellion and combined his electronic-based art with the activist practice. The work of the duch art and design formation Oddkin (Marton Kabai and Natela Lemondzhava), who investigate the relation between design and critical posthumanism, specifically focusing on slaughterhouses. Very inspiring was also Riccardo Torresi’s presentation about the project he realized with Maxime Lethelier and Asako Fujimoto (artist collective Ephemeral Tomorrow), an audiovisual installations which visualized remote gravitational phenomena in the outer space.